The homefront has been quiet lately.  The sun has lured us outside and our projects are languishing.  That said, we did manage to make two furnishing improvements that are driving me out of my damn mind with fabulousness.

One: the hall.  Otherwise known as the Portal of the Jagged Hole or the Part of the Wall that I Kicked in With Thighs of Steel, the hallway here has uneven flooring that desperately needs to be covered with a rug. 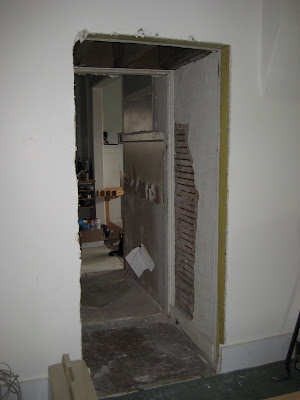 For about a year we've been making do with a white Ikea rug folded in half.  The pros of this plan were that when company was coming you could fold the dirty outside to the inside and pretend like the rug was always white!  Sneaky.  The cons were that pretty soon none of the four sides of the rug was white.  Example: 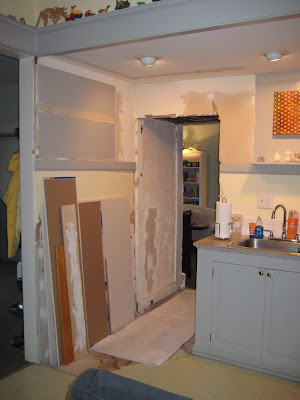 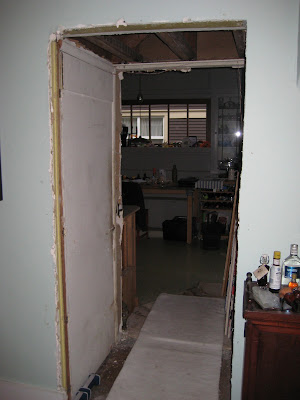 Oh classy.  So then there was a moment of divine intervention.  My wonderful and talented friend Miss Anna is actually a professional rug designer.  I know, right?  My friends are really cool.  So there came this amazing day where her rugs were featured on Joss and Main.  A friend of mine had her designs on Joss and Main!  Eek!  I was already a member, so I ogled the goodies, ran over to show the husband and we managed to agree on one in the space of five minutes.  Done!  We didn't even measure it and yet behold the awesomeness: 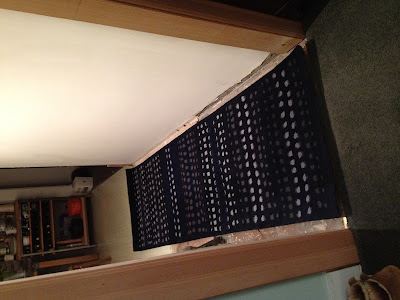 OK, you can still see a tiny smidge of ugly floor but SO. MUCH. BETTER.  (Again, with the new title for this blog.)  The rug is a wonderful navy tone with a palette of blues and greys and it fits so perfectly I can hardly stand it.  SO much better than the cotton folded ghettoness that previously lived here.  So thanks to Miss Anna for saving the hallway.

In the kitchen, we had lived with a dire assortment of mismatched chairs for too long.  Two red Ikea chairs (red being my least favorite color, awesome) were plunked in there with two hideous oak monstrosities that had unspeakable atrocities perpetrated on them by the renovation.  Although it certainly wasn't the chairs' fault that someone stood on them to paint/stain/gut a small animal, it certainly didn't make them more attractive.  Case in point: 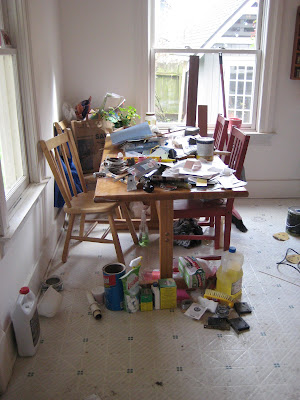 Ugh.  (Actually, the oak ones look fairly clean in this photo.  Shortly thereafter I think every chemical in the foreground was spilled on them and it was downhill from there.)

I've been trolling Craigslist for the perfect thing and finally a slightly odd option came up, a bunch of folding wooden chairs from 1941.  But I liked the lines and the mechanical engineer in me loved the mechanism.  The other chief engineer agreed so we brought them home: 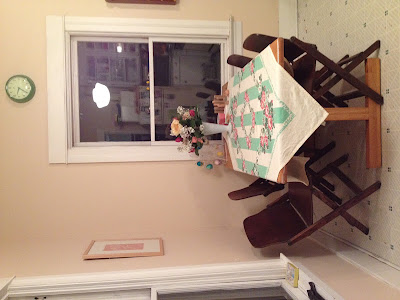 Whee!  I love how they're lower backed so they don't take up as much visual room, but most of all I love that they match and they aren't red.  Whee!  It's the little things in life.  Individually they look like this: 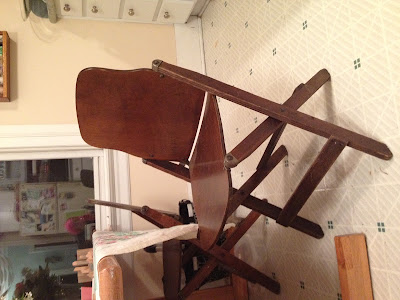 They have an amazing four-bar linkage action (nerd alert!), so they fold into an amazingly slim package: 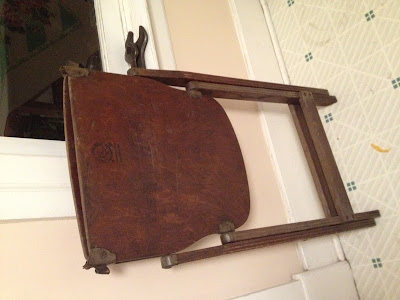 They were made by the American Seating Company, which is still in business in Grand Rapids.  Made in 1941, right at the beginning of wartime, they could have been for a church basement or for a super secret Army headquarters, who knows?

And the industrial engineeringy hardware makes me happy. 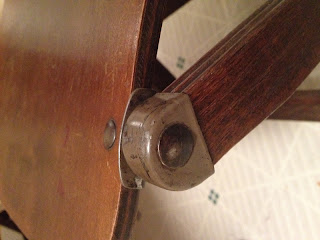 OK, so not as exciting as a total makeover, but still.  You wanna come over and pretend like we're taking an Army briefing?  Give me a call! 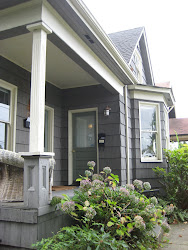 New Life, Old House
This is the story of two newlywed engineers and an old funky house. Follow along to share our renovation triumphs and failures, and our adventures in cooking and cohabitation.